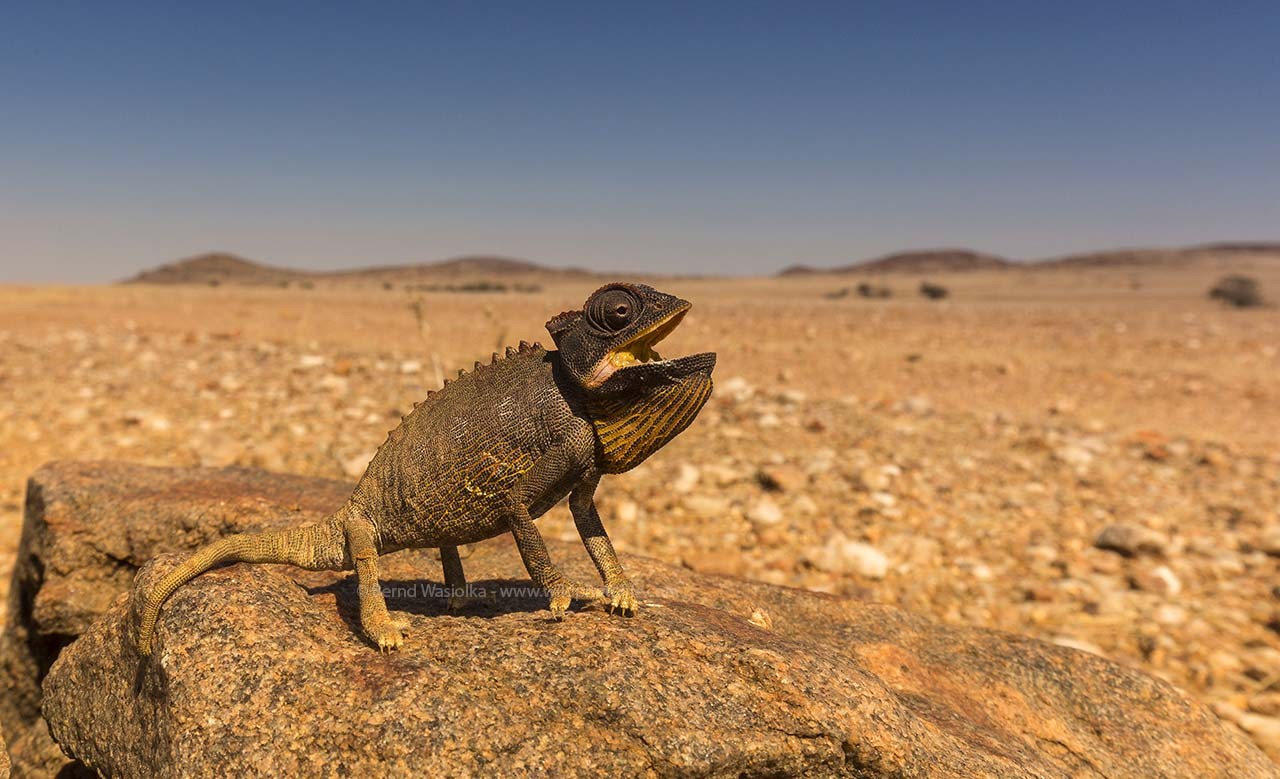 On my way through Kaokoveld in northern Namibia I travelled on a small track. Not only is it an absolute scenic stretch, it had a few other surprises in stock, too.

After a few km’s of slow driving I spotted a Namaqua Chameleon (Chamaeleo namaquensis) on the side of the road. I stopped, had a good look at it and left it on its own. It was perched on a small rock well hidden in a clump of high grass. Not a great photographic opportunity but nevertheless it’s always a special treat to see one. For a couple of years I haven’t seen even one. This one was already the second for this year, not to bad. On a farm in the southern Namib I encountered my first Namaqua Chameleon for the year.

In high spirit I carried on bouncing along the rocky trail. Spotting the first one I thought nothing of it, a lucky incident, at the right moment at the right place. About 10km down the track I spotted the second of the day. Luckily this one was more cooperative than the 1st. Again it was sitting on a small rock, but this time in the open. For photography the sun was already a bit high up the horizon, but who cares, hey, it’s a Namaqua Chameleon, one of the gems of the arid parts of Namibia. You are not seeing a chameleon everyday – at least I thought so. I snapped a few images. After a while the chameleon started to climb down the rock and moved a bit away.

For a while I watched it from the distance before I packed my gear away, jumped into the car, started the engine and drove off. Though not far. You believe it or not I managed to cover less than 100m, 30m to be precise. Another Namaqua Chameleon trotted along the track. Unbelievable the third one in less than an hour. This track turned out to be chameleon highway. It left the tack, stopped a short distance away and ogled the surroundings with its rotating eyes. With its whitish colour it blended perfectly into the background of pebbles. 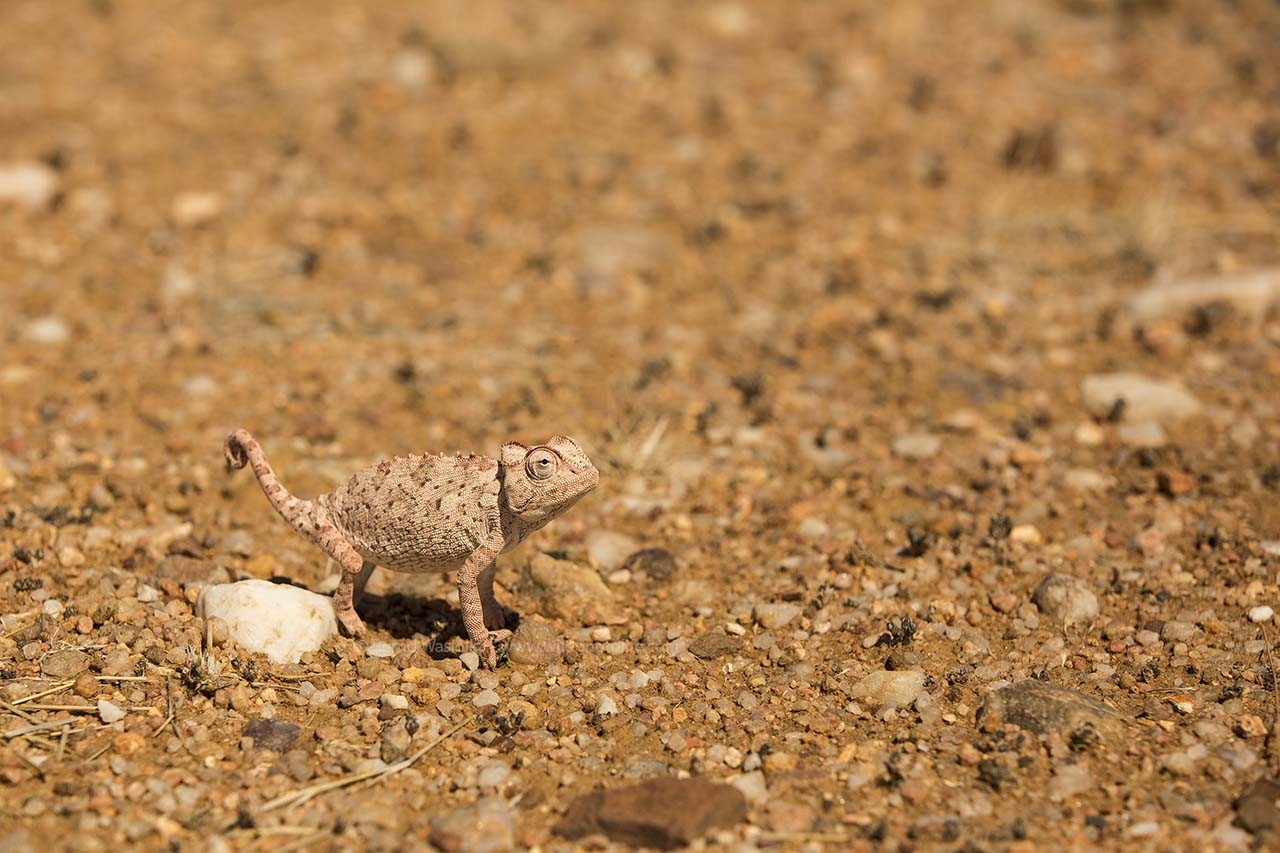 Chameleon’s ability to change their body colouration is not to blend in but to show their mood and to aid thermoregulation. As it was getting hot the chameleon lighten up its body colouration to minimize heat intake. After a short while it continued its way into the seemingly nothingness. As I haven’t driven far at all I decided to walk back to the 2nd Chameleon. A quick scan around and I spotted the guy on some pebbles close by. Compare to a few minutes ago it was pale yellowish-whitish, an adjustment to the rising sun and temperature to keep body temperature low. 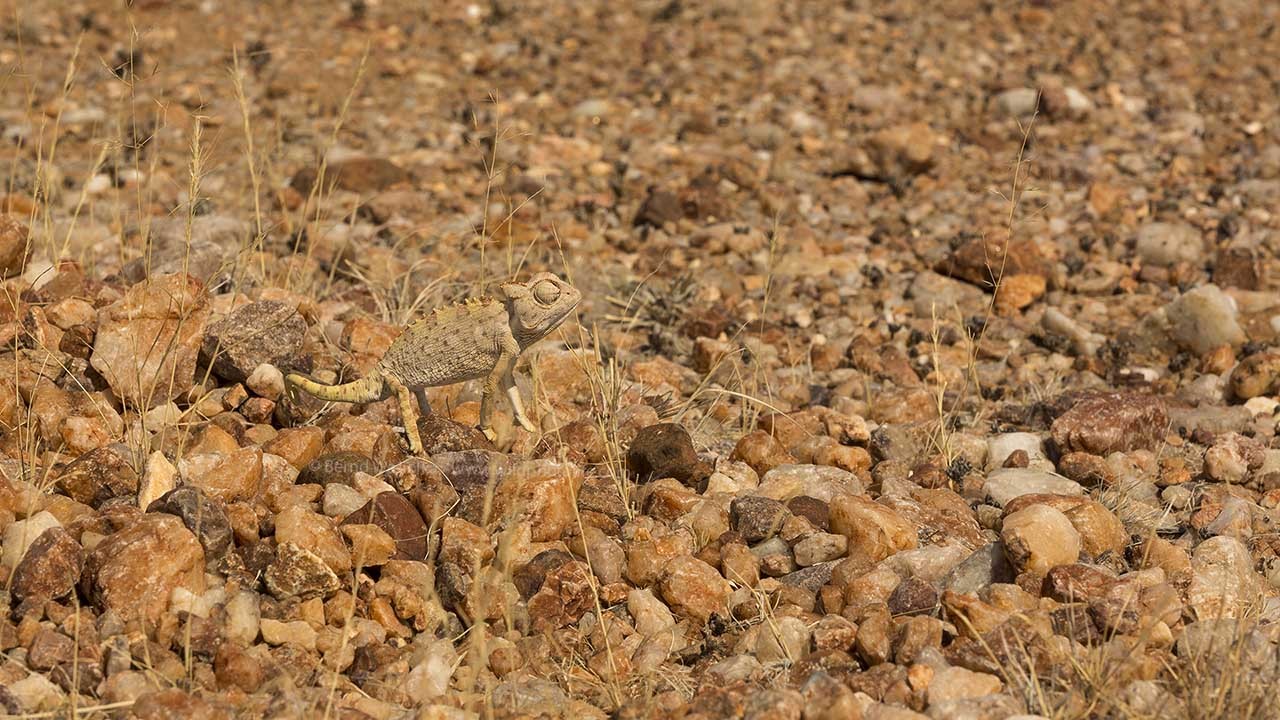 I left it on its own and walked back to the car. I looked around for the 3rd one, but couldn’t see it. I search the area for a while but somehow it has vanished. I gave up, started the car and was on my way again. This time I covered quite a bit of distance before I had to stop and look at my 4th Namaqua Chameleon of the day. I thought ‘Incredible four chameleons in a day’. And I wasn’t looking around the whole time as the rocky and corrugated track needed a lot of attention while navigating it. Another few km’s – you knew it - the 5th one appeared next to the road.

Once more perched on a small rock. I went close up and the chameleon didn’t cared a thing. As the sun was way too high I decided to snap only a documentary shot.

‘Will it ever end?’ And it didn’t end yet. Again some km’s down the track the 6th one showed up, sitting on a rock - business as usual. By now it was a quarter past one, the sun way to high and I had seen six Namaqua Chameleons in less than three hours – SIX! I couldn’t believe it. Definitely this was a very special day in the bush. In honour of this amazing/incredible/outstanding day I announce the 19th of May ‘World Chameleon Day’ (no clue if this day already excist).

You can believe it or not six Namaqua Chameleons in a day – what I’m saying in less than three hours.