A fabulous week at Sossusvlei 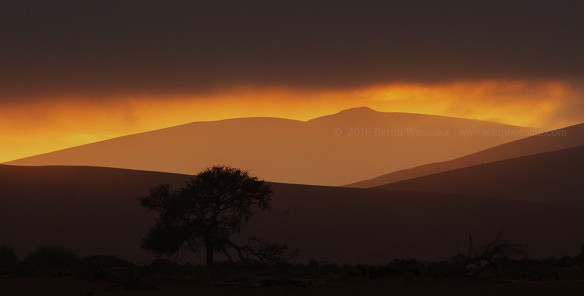 After a few changes to my original bookings I secured six consecutive days at the Sesriem campsite, Sossusvlei, Namibia. I was looking forward to a week’s playtime in one of the biggest sand pit in the world. And as an added bonus the sand comes in variety of red hues.

On my first morning I noticed on the long drive to Dead Vlei that there was some mist hanging in the air. My first reaction was disappointment as I thought I would miss out on the spectacle of changing sand colors while the sun rises. But on a second though I was exhilarated at the prospect to take pictures in unique light situation – Dead Vlei trees in mist. As it turned out it was something between both initial emotions. The mist wasn’t hanging low enough to cover the iconic trees in Dead Vlei. Nevertheless, I had a great start to my Sossusvlei time.

But it got still much better. Like usual I stayed the whole day inside at the Sossuvlei parking/picnic area, not driving back to the campsite as it’s a lot of km’s to drive and in my opinion a waste of time and fuel. I spend the hot time of the day in the shade of some of the massive camelthorn trees. In late afternoon I started looking around for exciting photographic opportunities. During the course of the day I noticed that there were a bunch of gemsbok hanging around doing exactly the same as I did – passing away the heat of the day in the shade of a tree.

Excitingly it turned out that they were quite tame – not running away as soon as they spot you. Some of them even came up to 10 meters while I was sitting at a picnic table having lunch. I saw my chance to get some great images of gemsbok in the red dunes. And I did ?

But quickly back to Dead Vlei. On the 2nd morning I went back to soak up the atmosphere in brilliant light. I took some of the classical shoots like dead trees in front of the orange glowing dunes and so on. As the Vlei was still nearly devoid of other people I decided to climb straight up the dune (pooh I need more exercises) to peek down from the top. From half way up the dune the trees in Dead Vlei look tiny and somehow lost in the vast white pan. From an elevated position Dead Vlei lost some of its magical atmosphere. Instead another attractive structure caught my eye – the drainage lines created by the run off by exceptional rain event over centuries. They look like uprooted trees to me and are very photogenic.

As the gemsbok presented themselves as approachable as on the first day I decided to dedicate my time entirely to the search of gemsbok and springbok in the dunes. I had several photo motifs in mind. The following days the mornings started with a quick look around at Sossusvlei picnic site and vlei area. If I could spot any gemsbok I stayed with it. Otherwise, I climbed the high dune area on the western side of the vlei in the search of my gemsboks. It’s a lovely area and you find pristine dunes as hardly anyone else ventures here (but that’s counts for more less any area in Sossusvlei asides from the main walkways of the tourists (e.g. climb of dune 45 …). While running around up and down the dunes in the search of gemsbok or springboks I always kept my eyes open for other photo subjects well worth to explore. For instant dune structures or smaller animals like lizards or insects.

Once in a while I spotted a lizard running around on the top of the dunes – a firm favorite of mine, the sand diving Shovel-snouted Lizard (Meroles anchietae). This guy dives in the dune slip-face if alarmed or uses the deeper and consequently cooler sand layers to escape high surface temperatures. They are really cool lizards but extremely difficult to photograph.

Some of them immediately vanish into to the sand if you get too close, others run up and down the dune and man they are fast, more like flying over the sand. No chance at all. After many failed tries be it to skittish individuals or to wrong locations patience and persistence played it’s part. Lucky I found a brave enough Shovel-snouted lizard who was so kind not to run away and to pose in the right place. To get really close I mimic the lizard behavior, dived into the sand swam closer and emerged in front of it. Ok not exactly like that, but at least similar. It was more crawling in the sand than diving and swimming. Finally, after a lot of crawl, stop, wait, inch forward I got close enough without frightening the brave one away. I got the shot I had in mind. After each of this crawling performances I was covered in sand. In every nook and cranny you could find it, ears, belly button and so on. It’s like stepping back in time – playing as kids in the sandbox or the beach. It took quite a while to get rid of the most of it. Not to speak about all. The shower in the evening had to do the final clean up. But who cares – it was well worth the effort.

But back to the gemsboks. In the late afternoon they slowly moved back into the dunes to start feeding. Some of them I could follow in a distance. It was still difficult to get some great shoots – firstly in the dunes they never let me as close as on the picnic site and secondly the gemsbok had more feeding in their mind than posing for a photographer. Many times I followed them for miles through the soft sand up a dune down the dune without any success. The gemsbok didn’t quite understood what I wanted – just a few images in the right place. I had more willingly posing subjects in front of my camera. And once again patience and persistence paid off.

The springboks were a total different story. Really shy – no matter if you approach them at the picnic site or in the dunes. Their flight distance is way bigger than of the gemsboks. Running springboks in the far distance wasn’t exactly the picture I was after. But that’s what I mainly got in the first few days. After many failed tries getting closer to them using every available opportunity for cover I decided to change tactics. Crawling through the sand was now the means of choice. In contrast to the lizard inch forward style this time I had to cover hundreds of meters. After a while you got used to crawl on your knees and elbows – at least the sand was warm and mostly soft. The biggest challenges were to keep the camera out of the sand and to avoid the many thorns in some of the dune areas. When I got close enough the crawl mode became more a stalking style, laying flat on the belly if one of the springboks lifted its head to look around, quickly crawling forward if all of them were busy feeding or looking away and again lying flat … And of course you had to keep an eye on the wind direction as well. It worked reasonably. Next time I have to invest even more time into the springbok game of hide, crawl and stalk to obtain the images I have in mind. For a first go I’m happy with the pics I got.

Even after a week and endless miles in the dunes one species evaded me, again (like on many previous trips). The sidewinder snake (Bitis peringueyi). I’m always on the lookout for this interesting little snake, but I was never lucky, not even tracks I managed to find. Ok, I guess I can’t have everything and at least there is another highlight left for my next trip – not that there is a shortage of great photo subjects in Sossusvlei. I’m coming back, for sure.