Around the campfire I heard from the old hands of the Kalahari about the terrapin and bird story at Craig Lockhart waterhole in the Kgalagadi Transfrontier Park, South Africa. The story goes like this:

Marsh terrapins live in the trough of that particular waterhole.  Once in a while one of them manage to grab an unsuspecting bird by it its leg while it is quenching its thirst or having a bath. The terrapin holds on and tries to drown the struggling bird.  After some time the strength of the birds slackens, it gives up the struggle and eventually the terrapin succeeds.  By this remarkable hunting style the terrapins living in the waterhole trough supplement their diet with bird meat.

Craig Lockhard waterhole is my favorite afternoon spot in the Mata Mata area. It’s not too far away from camp, offers a shady parking spot by a huge camelthorn tree and the afternoon sun shines directly onto the waterhole area. I have seen the terrapins swimming in the trough or moving around between the puddles created by an occasional thunderstorm during the rainy season but never ever anything close to the story told above. And I spend countless afternoons waiting for something to happen at that waterhole – I guess I have been sitting at Craig Lockhart for more than 250 afternoons.

But one day everything changed:

Since sunrise a bunch of lions are hanging around the waterhole – fully fed, bellies bulking under the nights feast – way to full to do anything besides sleeping.  So nothing to expect aside from a close up of a lion drinking.  Sitting in the car, looking around, reading a bit, keeping an eye on the lions, the afternoon moves on without any excitement.  All of a sudden I hear a flapping sound coming from the waterhole.  Looking up I see a Ring-necked Dove frantically flapping its wings and desperately trying to get out of the trough.  Immediately the story about the terrapins and the birds came to my mind.  Out of the corner of my right eye I catch a movement.  One of the sleepy lion youngsters lifts its head, spots the struggling dove, gives chase and catches it.  Hurriedly I grab my lens, drop it on the beanbag.  As the youngster lifts its head out of the water I’m ready to shoot. The lion youngster looks straight at me, water drips from its face.  To the youngsters and my own amazement two victims are hanging out of its mouth: not only the Ring-necked Dove but a Marsh Terrapin, too.  I just have a split second to capture a few frames of him starring at me, before the lion turns and run away with its surprise snack. 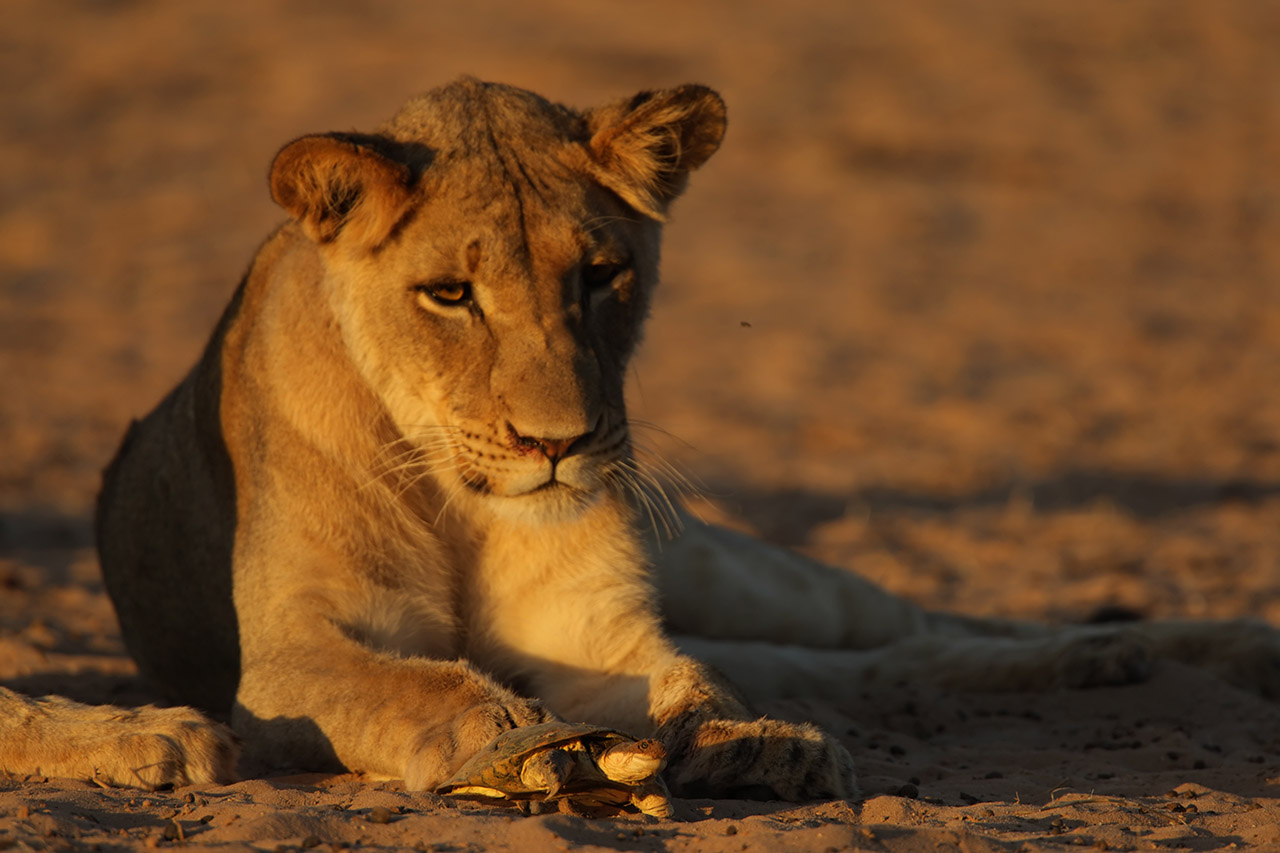 He quickly gobbles up the dove as the other lion youngster show some interest in the meal as well. The terrapin is lucky and doesn’t meet the same fate as the dove.  Because of its armoured body it survives as the lion youngster use it only as a toy, poked and pawed at it for about half an hour.

Despite the harsh treatment the terrapin makes its way back to the trough in one piece.

So the story which I got told many times finally became reality – with a tremendous bonus. Watching a terrapin grabbing a bird in a trough is quite a sight on its own.  But on top witnessing a lion youngster catching both is just unbelievable – what an amazing afternoon.

My 1st Aardwolf pics ever